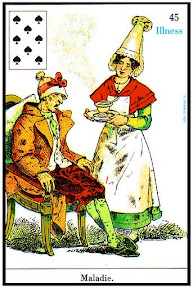 GENERAL MEANING : the paper does not necessarily describe a situation of physical illness but can also refer to a psychological malaise. It is not in general a very positive card.

STRAIGHT CARD: general negativity, illness, blocks, doubts, a difficult problem to overcome. If lying about health is a card that esorda to pay close attention. In love is an infertility situation, a conflict that has lasted for some time.

CARD DOWN : total change of opinion, discouragement of general deadlock. One person seriously discouraged, distrust of the beloved, psychological block to remove.

COMBINATION WITH :
If the consultation is about the work : this time is not suitable for making important decisions
If the consultation concerns the affections : the couple’s relationship should be analyzed carefully
With the Scare up or down : a bad omen

Up card brings weakness that indicates not only an illness (fever, headache etc.) That can only be momentary but also negative situations or maybe hide the mix ups, in short, no „sane situations“. If it were a project such as this is still weak, needs strength to go further. Sometimes incentives to speak.

Down card brongs a more serious illness or heavier than up card. That is a heavy blockade and stagnation due to strong impossibility of movement or making a choice for consultant. The feeling of losing the ground under the feet, disabling will, withering away.