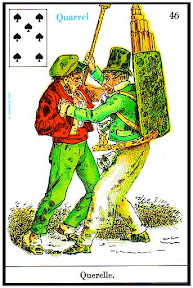 MEANING : we should never deal with situations in which you are competing with other people. It’s an idea opposed, a different point of view, a person from the angry and arrogant character that is good to keep away.

CARD STRAIGHT: the consultant is faced with a situation in which compares their intellectual abilities with an opponent since the dispute would be dealt with anger climate. A clash in the workplace, a dispute with a colleague. In marriage it involves a period of crisis, the engagement and friendships a temporary break.

CARD DOWN : We recommend moderation and remain calm in any situation: the problem you are facing is not so relevant. The paper is the opposition of two opposite poles. In the work indicates dismissal, problems with a deal related to misunderstandings between the parties. Family discussions between relatives.

COMBINATION WITH :
The Military: problems with the law
Players: discussion with a friend for a futile reasons

Up card brings violent arguments. This card indicates a period of strong nervousness that leads the consultant to react badly and not knowing how to handle the rabbia. Also speaks of jealousy but it is said that this is justified.

Down card : here is too nervousness, but it is not always expressed anger is within. Potential risk it is that the consultanc can explode at an inconvenient time or for stupid reasons.