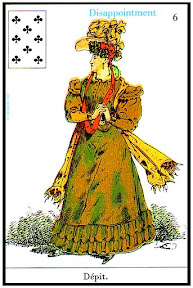 GENERAL MEANING: angry person, whimsical, prevalence of selfishness on common sense. Circumstance in which, because of pride, a situation will not have the right outcome. In any case symbolizes a spiteful person against the consultant.

CARD UP : describes the attitudes of envy and indisposed synonymous with insult, cheating, insincere friendship. Project tampered with by an intruder, treacherous hand that creates chaos. In the emotional sphere a stinging pique even for no reasons, caprice also dissatisfied by the sexual point of view, inappropriate comparisons. A hidden friendship, insincere declaration, fraud, misappropriation of money. Council inappropriate, disproportionate.

CARD DOWN: takes less concrete meaning in that it determines teasing of futile importance, resentments, white lies. Situation in which the consultant is unjustly accused. Action likely to damage the solid foundation of the relationship, longstanding dilemmas, reconciliations suffered, unfavorable compromises. In work causes temporary bad relations with the boss or staff or colleagues. A subject of particular negative influence to keep under control.

COMBINATION WITH:
Angry Woman : a particular attitude of facing by a relative or woman rival in love matters.
The Country House : theft or misdirection

Card up indicates the hassles, the anger nervousness. The consultant can not handle situations calmly and probably lured in delirium. Resentments and whims.

The reverse card is weakened by making it less enduring the anger. Sometimes it indicates nervousness with no motivation but that passes quickly.