Sibilla Indovina ~ A man of Low 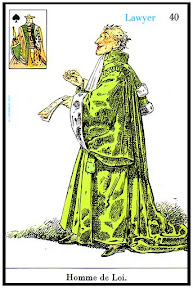 GENERAL MEANING : educated man, intellectual, of great virtue. The card represents everything about the law. The situation is to be treated with care.

STRAIGHT PAPER: the paper invites to seek a link to find the solution to his problem. A just cause in favor of the consultant, successful positive of a situation where you are in for some time. Urges work to assert their rights without fear the judgment of others. Feelings in a separation that fades, the recovery of a lost balance.

CARD DOWN : a situation not compete with justice, an unfounded accusation of being wrong. At work a higher cause problems. In love it is in sight a definitive breakdown of the relationship. A rash decision.

COMBINATION WITH :
The Military : big legal problems, difficulties insurmountable
The Letter : you manage to get the money you are entitled to

The up card is a man defined by the low, just a little cold but also in its relations with other people. Sincerity, justice. This card indicate a difficult situation but that one special persone will risolvere it. Judge, a lawyer. Justice. Equilibrium.

The down card : the injustice with the upside down card is strong. By using his power to harm others or to assist them. The man law inside out becomes a corrupt evil man, a person to be highly ambivalent and unpredictable. Inclined to bribery and corruption. Wearing the innocent mask behind which is hiding a very very bad person.